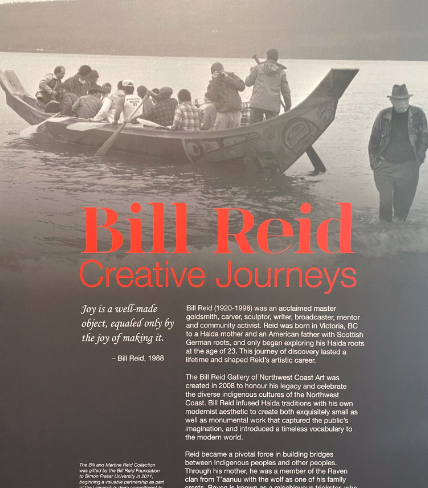 This summer, I was blessed to spend a whole month in Western Canada. There was nothing normal about this trip. And even though, I’ve been to Canada several times before, in a way it felt like it was the first time. Doing things differently, allowed for me to see things differently. Basically, the whole trip was an artist date.

Before we left, I had already decided on a ‘real’ artist date. When visiting British Columbia, the thing that is more prevalent than any other thing is the presence and growing acknowledgment of the ancestry, rich culture and history of the First Nations of the North West. So, in the last week of our trip. while in Vancouver, on a sunny Sunday morning, early August, as the man and the teen were skating through Stanley Park, I visited the Bill Reid Gallery of Northwest Coast Art.

“Bill Reid  (1920-1998) was an acclaimed master goldsmith, carver, sculptor, writer, broadcaster, mentor and community activist,” it said on the poster in the museum. He was a  descendant of the Haida Nation through his mother. Both his maternal grandfather and great grandfather were talented artists. He was taught by his grandfather, who in his turn learned from his father the traditional carving techniques and ancient Haida design. By reconnecting to his ancestors, and his ancestral culture and traditions, many of which were lost as a result of the Indian Act*, Bill Reid connected to his indigenous identity, which he explored and shaped through his art and activism.
Bill Reid’s work includes sculptures, including the Chief of the Undersea, in front of the Vancouver Aquarium, and the Spirit of Haida Gwaii at Vancouver Airport. as well as wood carvings, prints, and jewelry. During his life, he created more than a thousand original pieces

Joy is a well-made object, equalled only by the joy of making it.

At the Bill Reid Gallery of Northwest Coast Art, only a small portion of his work is exhibited., namely the Simon Fraser University Bill Reid Collection. The indigenous art of the Northwest is very stylized, characterized by clean lines and shapes, steeped in cultural symbolism. Bill Reid found ways to develop his own style celebrating his cultural heritage, reviving and renewing Haida art. I love his clean lines, the simplicity of his designs, and the way he mastered his ancestral craft and at the same time had made it his own.

Through his mother, Bill was member of the Raven clan. The Raven is the most powerful of the mythological creatures in Haida culture. The Raven is a mischievous trickster, having the ability to move between worlds. He represents creation, the unknown and and he plays an important role in transforming the world. Bill Reid identified himself with the Raven. In 1986, he was given a Haida name, Yaahl Sgwansung, which means The Only Raven. I don’t know how or why he was presented with this particular name, but I do think it is fitting. He breathed new life into an art that was almost extinct, and with his work has changed the world. His work powerfully impacts the world to this day. The Raven has several names. Xōya is its personal name.

In the Bill Reid Gallery, next to Bill Reid collection, work by contemporary indigenous artists is exhibited. Artists, who like Bill, try to reconnect to their ancestral culture through their work. The work varied from paintings, analogue and digital, to wood sculpting and beading.

The work that moved me most was by Steve Smith.  Steve paints mostly on wood, and is inspired by his roots. He is, however, not bound by form, allowing his work to evolve with every piece he makes. He has created two large installations for the domestic pier of Vancouver Airport. He says his work changed after a near death experience in 2013. “Colours became brighter and designs and concepts were gifted to me through a subconscious process.” His work is meant to inspire gratitude, optimism, peace and harmony. You can learn more about Steve’s work through his website.

Another artist that moved me was Serena Steel, she is an upcoming multidisciplinary artist who works mainly with beads and ceramics. Her work focuses on connection and belonging to family and community. Whereas with Steve Smith’s work it was the aesthetics and the bright energy that pulled me in, here it was the intimacy, the story she told both in beaded embroidery and words.

She writes: “I belong to my people and the land that I come from. I am responsible to those I belong to, and this responsibility is not a burden but rather an opportunity to hold more than myself in my body and spirit. It is powerful to belong.”

This small embroidered piece was accompanied by a long word poster, with personal stories about belonging. which was deeply moving. I want to finish with an edited piece from that poster. For the simple reason that it touched me.

I personally do think art was never a solo endeavor, until fairly recently that is. Artists were mentored, had groups of other artists they hung out and worked with. Somehow, more and more, art has been stripped of community and belonging. Yet, it is this sense of belonging we’re all after. A connection not just to what inspires us, but to a community of creators. And if we don’t find that in our own family, in our own community, let us go out and create one to share and laugh with. Because arting is medicine when done in the right headspace. And what brings out our light better than being surrounded by other creators we feel connected to, who inspire us and celebrate both our creativity and our humanity.

* If you are unfamiliar with how First Nations were (and still are) treated by the people who invaded and occupied their lands, please educate yourself on the efforts of annihilation of First Nations Culture and forced assimilation of indigenous people, and how they still affect the every day life of First Nations people today. You can read about the Gradual Civilization Act, the Constitution Act, the 11 Numbered Treaties,  the Indian Act and its amendments, and, the Residential Schools to get an idea. Even though these examples are limited to Canada, these practices were not.


If this resonated with you, then consider sharing it with someone who will love it too. And while you’re at it, you may want to subscribe to my newsletter as well. Biweekly, I will send you a letter, called three.word.wednesday. My intention, to inspire and inform. Don’t worry, I won’t spam you. Scout’s honor.

This site uses Akismet to reduce spam. Learn how your comment data is processed.

THIS WEBSITE USES COOKIES to give you the most relevant experience by remembering your preferences and repeat visits. By clicking “ACCEPT”, you consent to the use of essential and non-essential cookies. To manage your consent, visit Cookie Settings.
ACCEPTRead More
manage consent

This website uses cookies to improve your experience while you navigate through the website. Out of these, the cookies that are categorized as necessary are stored on your browser as they are essential for the working of basic functionalities of the website. We also use third-party cookies that help us analyze and understand how you use this website. These cookies will be stored in your browser only with your consent. You also have the option to opt-out of these cookies. But opting out of some of these cookies may affect your browsing experience.
Necessary Always Enabled
Necessary cookies are absolutely essential for the website to function properly. These cookies ensure basic functionalities and security features of the website, anonymously.
Functional
Functional cookies help to perform certain functionalities like sharing the content of the website on social media platforms, collect feedbacks, and other third-party features.
Performance
Performance cookies are used to understand and analyze the key performance indexes of the website which helps in delivering a better user experience for the visitors.
Analytics
Analytical cookies are used to understand how visitors interact with the website. These cookies help provide information on metrics the number of visitors, bounce rate, traffic source, etc.
Advertisement
Advertisement cookies are used to provide visitors with relevant ads and marketing campaigns. These cookies track visitors across websites and collect information to provide customized ads.
Others
Other uncategorized cookies are those that are being analyzed and have not been classified into a category as yet.
SAVE & ACCEPT