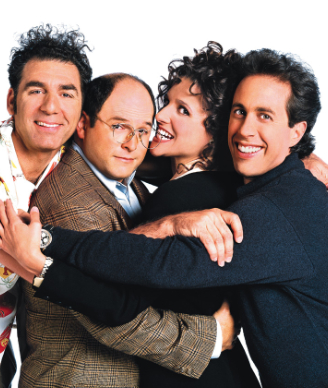 If I were a sitcom, it would be hysterical! Imagine a zealous Mother Superior, a pretentious artist, a wannabe guru, a mysterious mystic, the glamorous yet capricious Miss Piggy, and an assertive six-year old Mouse named Ieniemienie all living together in one house in the Big Apple.

This week I met up with the characters. Here’s the cast:

Mother Superior
is everything you expect from an abbess. Think Sound of Music and then make worse: super strict, extremely organized, highly efficient, goal-oriented, task-focused, and no fun. She was in charge, leading all the other characters as if they were nuns in her abbey Needless to say, everyone suffered. When Mother Superior is out of control, she is like a tyrant who expects everyone to be just as disciplined and austere as she is, which is basically impossible. All she really cares about is the well-being of the whole system and what she wants most is for the system to thrive.

The pretentious Artist
is kind of a drama queen, who is never satisfied with what he creates. And yet, he believes he is above all others, destined to make Art, capital A of course. To do that he needs freedom to explore and create, something he doesn’t get from Mother Superior, who believes he should get a job and do something useful with his life. All he really cares about it is inspiration, and what he wants most is to create a sublime piece of Art.

The wannabe Guru
is an autodidact with confidence issues who doesn’t know if he’s got enough credentials to tell other people what to do. All he wants is an audience of eager learners with whom he can share all the lessons he has learned himself in order to create a better world. He never is convinced his ideas will help others, and usually abandons his projects before he is well under way.

The mysterious Mystic
doesn’t care about outside validation. All she is interested is uncovering the truth, get to the heart of things. She needs the freedom to explore the inner-world, and only wants to understand the Meaning of Life, or God, or the Universe, and be it.

Ieniemienie and Miss Piggy
really are the same, with Ieniemienie wanting to play in the sandpit and catch frogs, and Miss Piggy being the adult version, wanting to play with one particular Frog. They both have a certain need for attention, most of all want to feel good, love flirting, one innocently and the other not so, and can throw a power tantrum when they do not get what they want.

No, I’m not schizophrenic, not more than most of you at least, but yes I do have voices in my head. We all have. I just decided I wanted to get to know them. So I befriended them and hung out with them, I found out what they love, what they want in life and what they need most. To fully function as a human being, I need to understand their personal dynamic, the function they hold within the group and the group dynamic, because as successful as this combination may be for a sitcom, for a successful life it can be a total disaster.

In order to make things work, I have assigned myself the role of leader. I have put up some new guidelines and function descriptions. For now, it will be great if Mother Superior can support the artist, the teacher and the mystic, help them organize the practical side of their life and motivate them to get the best out of themselves, without interfering with their creative expression, if Ieniemienie can help them access their inner-child and miss Piggy can help them access their own pizzazz. Later on, it would be great if the artist, the teacher and the mystic could work together on a project, and if Ieniemienie and Miss Piggy can not only respect Mother Superior and vice versa, but truly understand each other’s value. But let’s not get ahead of ourselves. One step at a time.

So here’s my question for you: what does your personal sitcom look like? Who’s your cast? What are the characters? What are their names? Where do they live? And how are they making each other’s lives miserable? Just listen for their voices. If you have trouble distinguishing, look into archetypes and see of there are types that resonate particularly with you, then just see if you can hear what they are saying as you go through a typical day, make notes, finetune, and most of all have fun! And then, when you have a cast, just see how they treat each other, what they say to each other. Don’t judge, just observe. Make notes. Until you can clearly see the characters and how they relate to each other. Find their strong points and their weak points, and imagine how they could work together more cooperatively. And then find ways to make that work. Break a leg!

This site uses Akismet to reduce spam. Learn how your comment data is processed.

THIS WEBSITE USES COOKIES to give you the most relevant experience by remembering your preferences and repeat visits. By clicking “ACCEPT”, you consent to the use of essential and non-essential cookies. To manage your consent, visit Cookie Settings.
ACCEPTRead More
manage consent

This website uses cookies to improve your experience while you navigate through the website. Out of these, the cookies that are categorized as necessary are stored on your browser as they are essential for the working of basic functionalities of the website. We also use third-party cookies that help us analyze and understand how you use this website. These cookies will be stored in your browser only with your consent. You also have the option to opt-out of these cookies. But opting out of some of these cookies may affect your browsing experience.
Necessary Always Enabled
Necessary cookies are absolutely essential for the website to function properly. These cookies ensure basic functionalities and security features of the website, anonymously.
Functional
Functional cookies help to perform certain functionalities like sharing the content of the website on social media platforms, collect feedbacks, and other third-party features.
Performance
Performance cookies are used to understand and analyze the key performance indexes of the website which helps in delivering a better user experience for the visitors.
Analytics
Analytical cookies are used to understand how visitors interact with the website. These cookies help provide information on metrics the number of visitors, bounce rate, traffic source, etc.
Advertisement
Advertisement cookies are used to provide visitors with relevant ads and marketing campaigns. These cookies track visitors across websites and collect information to provide customized ads.
Others
Other uncategorized cookies are those that are being analyzed and have not been classified into a category as yet.
SAVE & ACCEPT